Ahmedabad – Saturday, on a cool, crisp, sunny morning, more than 50 mothers and pregnant women, clad in vibrant white at Parimal Garden in Ahmedabad participated in the “Breastfeeding Awareness Walk” 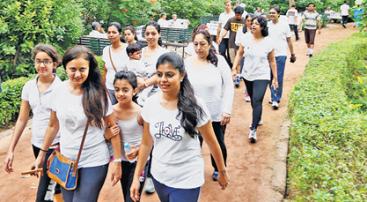 to spread knowledge, raise awareness and to generate cultural support for moms.

“I was looking for my own support in my breastfeeding journey,” said Rita Singha, founder of Pregnancy101, “there was no support group here in city… so I thought why not start one.”

“This year’s theme is ‘Breastfeeding and Work: Let’s Make it Work,’ said Dr. Gunjan Shah, a city based dermatologist. “The core focus is on women who are employed and for them to be able to continue breastfeeding and working.”

“Breastfeeding is a basic human trait and requirement. It’s just that here in the cities, particularly in the mega cities, mothers have moved away from the act and feel this Breastfeeding act as awkward and uncomfortable. So, such awareness march will for sure give positive impact towards Breastfeeding to overcome the level of discomfort, “ said Kajal a woman who is eight months into her pregnancy.

“It’s not as easy as some people make it sound like, ‘oh, you know you don’t have to prepare bottles or wash bottles or anything like that.  But there’s so much more involved with breastfeeding.  It’s like a dedication and commitment, it’s kind of like a lifestyle,” Said Rita Singha.