This year in 2015 we celebrated Father’s Day at Rita’s Pregnancy 101, Bodakdev with doting fathers and they little ones (and of course their better halves). Father’s day is a tradition dating back to the early 20th century. Originating in the US, Father’s day was began to be celebrated on the lines of Mother’s day. The members from postnatal classes at Rita’s Pregnancy 101 were in attendance. 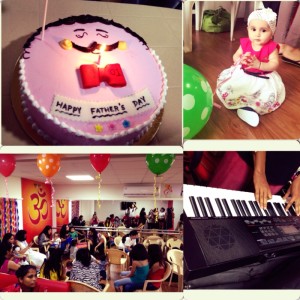 On 21st June 2015, Sunday evening we had a fun event for the fathers along with their wife & infant at Rita’s Pregnancy 101. The families had great time with few games, cake cutting, food, live music and father-infant activities. We had fathers talking and sharing their fun experiences and incidences faced while raising their playful infant. We also had them talk about ‘their wife’s role as a mother’….which gave the mommies an “awww” moment. 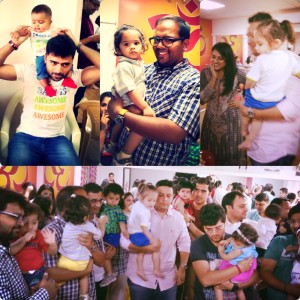 Infants and family fun activity experts from Peek A Book were also present at the event with they musical instruments & signers. The pregnancy classes in Ahmedabad are so much more than simply prenatal exercises and pregnancy yoga.

Unlike olden days child is no more a sole responsibility of the mother. Father plays equal role in upbringing and instilling the values and etiquettes in the child.

For me Fathers Day is way more than its online meaning ….. Being an over pampered daughter to my dad and witnessing the same strong bond between my daughter and my hubby ….. has increased my belief and faith in power of FATHERHOOD. Family attending the prenatal classes at Bodakdev will also get the same warmth of this precious bond. 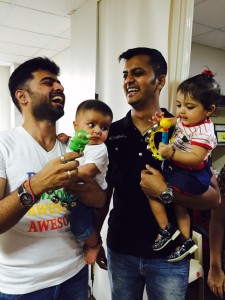 Someone rightly described the father child relation as under, which I strongly and heartily believe in:

Glimpse of the event with some pictures can be found on Rita’s Pregnancy 101 Facebook page at https://www.facebook.com/RitasPregnancy101