Navratri in Gujarat is an experience not to be missed. Anyone who’s grown up in Gujarat or lived here would agree that the Garba dance during Navratri is a one of a kind event, where every Gujarati revels in the dance festival for nine nights. 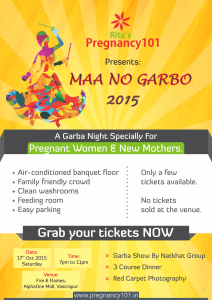 This ancient tradition of dancing away the nine nights of Navratri as form of worship to the goddess Amba has morphed into a modern day dance fest. It’s all good to see the traditions remaining alive and kicking. However the garba nights instead of being a rhythmic dance performed by women of all ages, it has now become a big and crowded mega event at most venues. Senior citizens, pregnant women and new mothers can’t dare to venture into one of these venues, no matter how excited they are about the Navratri Garba.

So this year, Rita’s Pregnancy 101 has taken the initiative to organize a Garba night which is children friendly and fun for pregnant women, new mothers and their families. Smallest of details have been taken care of, such as clean toilets, nursing rooms, plenty of sitting arrangement, ample parking, free entry for kids under 5, dinner and early night timings. The event is covered well by the national media, which will help spread the word: IBNLive

DJ Kabir from Fire and Flame at Alpha One Mall, Ahmedabad will rock the night with traditional garba beats. This is an initiative by Rita’s Pregnancy 101 to make Navratri Garba an inclusive event, where everyone who wishes to revel in the Garba can do so without any apprehensions.